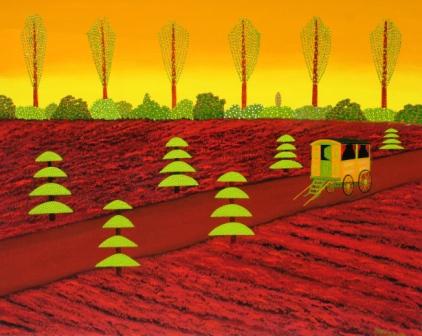 Bryan Kelly was born in Ennis, County Clare. He was educated at The Christian Brothers School in Ennis and Limerick. In the early sixties Brian studied Garment Technology which included textile design, at Leeds University in Yorkshire.

Most of Bryan Kelly's commercial working life was spent in the textile industry in a very labour intensive way and he describes his move to a career in art as adopting a life where he has found a freedom of expression and a way to work that is, in many ways, the opposite to how he worked before. He taught himself ceramics and opened his first art studio in Lancashire in the 1974. More recently he has concentrated on painting in preference to pottery. His art work has been exhibited widely in Ireland and England.

Influences on Brian Kelly's art work include: Van Gogh, Pissarro, Monet and the Naive artists Rousseau and Ma Moses. He describes his paintings as simple and uncomplicated, appealing more to the heart than the head. He hopes his art work imparts a feel good factor to viewers and art collectors.

Bryan Kelly does not plan or sketch his art work. Speaking about his work Kelly says:'Paintings happen. I never know where they might go - which keeps the excitement'. Although not always featured in his paintings, the influence of the Irish landscape and environment is important to Kelly. He feels that the essence of the landscape with its trees and hills has been absorbed subliminally and so emerges in his Irish art work. He does not include people in his paintings but says that people are 'obvious by their absence'; farm animals and buildings suggest the presence of people.

Taking three weeks to complete each one Bryan Kelly usually paints twenty pictures a year. Each painting is carefully worked and full of thought provoking, imaginative elements. Texture is also important to Kelly and the raised dots of colour that appear in many of his paintings play a part in bringing his paintings to life.

In addition to Red Rag Modern Art Gallery Bryan Kelly has exhibited at other leading Irish Art Galleries. Each painting at Red Rag is sourced from the Bryan Kelly artist studio and like all Red Rag Irish art and Modern art it can be shipped worldwide.

For more information or to buy Irish modern art from Bryan Kelly: