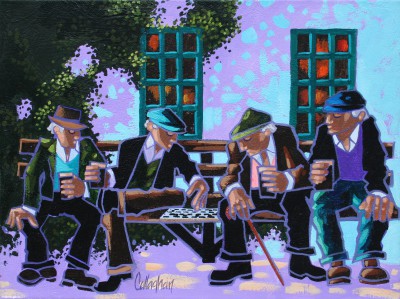 George Callaghan was born in County Antrim, Northern Ireland in 1941. George left school at 15 to work at Nicholson and Bass as an apprentice Commercial Artist. A year later he commenced studying Art at the Belfast College of Art on a Scholarship.

After studying at Belfast College of Art George started work in Dublin as a designer. Callaghan then left for London before continuing this career for a number of years working in Australia for a number of leading advertising agencies as an Art Director. At the age of 32 he then moved to the Australian Island State of Tasmania where he lived for many years before moving to France for a number of years. He has now returned to Tasmania but returns regularly to Ireland to sketch and renew friendships.

The move to Tasmania prompted a big change in Callaghan's career. He set up a studio which he still maintains today. He also started to make musical instruments becoming an accomplished harp player. He now enjoys the reputation of being Australia's leading Harp maker and a leading exponent of the Celtic Harp. Recordings of his harp music include two compact discs, 'Traditional Airs', and 'Rhyme and Reason' along with several cassettes.

However, it is Callaghan's paintings that have created consistent interest over the years. His paintings whether in Acrylic, Oil or Pastel all exude a certain quirkiness and narrative with his native Northern Ireland roots very evident.

Although George Callaghan attended Art College, he insists that most of his skills and discipline were learnt from advertising. He believes art cannot be taught because no one knows what art is. All you can teach, George says, is technique - and leave their minds alone. He now paints in the style he developed before he received any fine art training.

George Callaghan paintings are in an naive style. His landscapes are without depth or perspective and chimneys are often stylised with puffs of smoke whilst trees appear as little green balls on a stick. Drawing, design and colour are finely developed in George Callaghan's meticulous painting technique.

One of the influences on George Callaghan's art works is the surrealist painter, Escher. George has used elements of Escher approach and adapted it to his own purpose. He has a beguiling gift for symmetry and pattern and demonstrates close attention to detail.