Pueblo Blanco Beneath The Hills 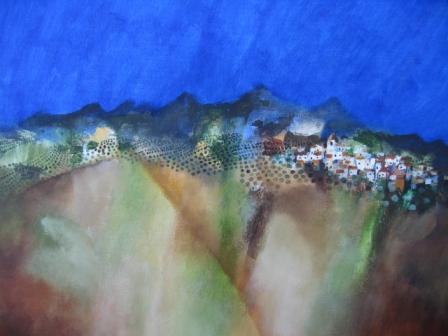 Manus Walsh was born in Dublin in 1940. His first job was in a graphic studio. This was followed by a period at Abbey Stained Glass Studios, Dublin where his initial training began in the field of stained glass. It was during this time that Manus met Irish Artist, George Campbell who encouraged him to pursue a full time career as an artist.

After spending a period of time in Spain, Manus had his first art exhibition in the Dublin Paintings Gallery, Stephen Green in 1967. Since then Manus Walsh has had over 30 art exhibitions and has exhibited in numerous group artist shows.

The Irish west coast and especially Burren in Clare has had a major influence on Manus Walsh life and paintings. Manus has produced many art works featuring this dramatic Irish landscape. Another influence on Manus Walsh paintings has been the city of Valparaiso in Chile. Walsh's recent paintings have contrasted the colourful vertical kaleidoscope of Valparaiso, with the dramatic horizontal lines of the Burren.

There is something intensely personal about the art style of Manus Walsh that makes his paintings easily identifiable as that of Manus Walsh. His images are poetic, atmospheric, unpretentious, and subtle.

Manus Walsh art work has been described as cubist, abstract, impressionist, surreal, naturalistic and romantic. He is a leading exponent in the craft of enamel on copper and has produced a number of exciting art works in this medium. Manus works in stained glass, enamel, oils, pastels, gouache, chalk, collage, graphics- what ever comes to hand it seems! As a result, Manus Walsh's career has been characterised by an imaginative diversity of subject and technique, an ever-present willingness to experiment with the new or re-visit old ideas